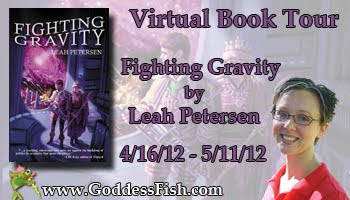 This post is part of a Virtual Book Tour scheduled by Goddess Fish Promotions. The author will be giving away a prize pack containing these items hand knit by the author: a hat, a replica of the symbol of an important institution referenced in Fighting Gravity to TWO randomly drawn commenters during the tour. Click on the banner to see the other dates of her tour.

The Things I’ve Learned from the Voices in My Head

I think there’s really no use in pretending authors aren’t hearing voices, if not entire conversations in our heads, right? Just so long as we’re recording them and not talking back to them, I think we’re OK.


It never occurred to me that writing was anything more than a skill, a hobby, a business, maybe. But the process of watching the characters unfold over the course of the story in FIGHTING GRAVITY has taught me a lot about life and about myself.


Early in the first draft, I began to realize that my main character shared a lot of my own flaws. (He also had strengths I wish I had, and I don’t think that’s a coincidence.) Once I saw the pattern, I began to pay attention. Sometimes when his flaws drove his actions, things went really, really wrong. A reality of life I was already painfully aware of.


But sometimes, those same traits made all the difference in a situation that could have been terrible and turned it into something else entirely.


In the early part of the story, (no spoilers) Jake has been taken to a prestigious school where he’s made painfully aware that he is not welcome. In fact, even the teachers and administrators do their best to undermine everything he does. Jake was just a kid, and was on his own with no recourse against this prejudice. He could have been crushed, he could have been discouraged and bought into the popular opinion about himself and given up.


But Jake was a bit of a rebel. He wasn’t one to obey an authority just because they said he should. Quite often, that got him in trouble throughout his life, both before and after that point. But facing the universal opposition at the school, it was the thing that gave him strength to stand up for himself and the focus and direction that ultimately saved him.


Jake taught me that most things are subjective, including what’s a good or bad character trait. Yes, the rebelliousness was behind some of his crashing defeats. But it often drove his greatest successes too.


It’s one of the great things about fiction, what it teaches us about life. What have you learned from fictional characters?

Leah Petersen lives in North Carolina. She does the day-job, wife, and mother thing, much like everyone else. She prides herself on being able to hold a book with her feet so she can knit while reading. She’s still working on knitting while writing.


FIGHTING GRAVITY is her first novel.


Find the author online at:

When Jacob Dawes is Selected for the Imperial Intellectual Complex as a child, he’s catapulted from the poverty-stricken slums of his birth into a world where his status as an unclass is something no one can forget, or forgive. His growing scientific renown draws the attention of the emperor, a young man Jacob’s own age, and they find themselves drawn to each other in an unlikely, and ill-advised relationship. Jacob may have won the emperor’s heart, but it’s no protection when he’s accused of treason. And fighting his own execution would mean betraying the man he loves.

Posted by Long and Short Reviews at 4:00 AM